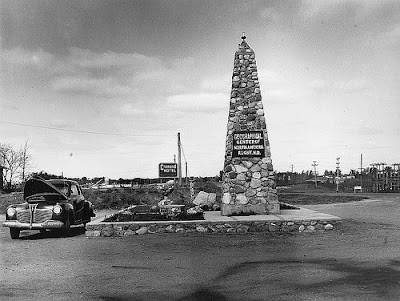 MORE FROM NORTH DAKOTA
I went well out of my way, on May 10, 2001, to reach Rugby, ND, the geographical center of the North American continent. A little on a Great Plains map can mean hours — and I didn’t question my decision for a second. This is my journal entry:

The Rugby visitors center is why you travel.

Located across the road from the cute stacked-stone geographical center of North America marker, the worker here — dressed in a ‘Rugby – Geographical Center of North America’ jacket — is a serious, bald, 35-year-old local who sells Mexico and Canada flags along with US ones to keep the North American focus. He takes that seriously. He pulled out travel planners he’s painstakingly collected from all 50 US states and much of Canada — to have onhand, as a defacto representative of North American travel, here in a sad wind-swept town far from an interstate.

‘It’s something,’ he said in an eager monotone, with a trace of a Fargo accent. ‘You really learn which states have the highest tourism budgets and which don’t.’ Which have the least? ‘Oh Virginia, definitely. They sent us just one guide. Said if we wanted more we’d have to pay postage,’ he added without a trace of resentment. ‘But New Jersey, they sent us cartons of magazines and brochures. They sent us 1000 New Jersey maps.’ I laughed at this, but he clearly saw no humor in it.

Rugby wants to create a new visitors center, but ran out of money. He showed me three separate artists’ renderings of a new proposed center. I left to check out the North American stone marker across the street, first asking if it really was the real geographical center.