By Robert Reid | May 12, 2009 - 9:46 am | Places, RO-Travel, Russia, Uncategorized, Video
Yakutsk is the coldest city in the world. In winter, temperatures can fall to 70-below Farenheit. Locals (split evenly between Sakha and Russians) must keep cars running all day — or in heated garages — or their motors freeze up till May. It stands on stilts, to protect itself from the thaws and freezes of the cruel permafrost below. Yet when I returned last June to update the Lonely Planet Russia guidebook, I got heat exhaustion in temperatures nearing 100 degrees.

A place that cold and that hot? That’s just not fair.

It’s an unusual place. About 30 hours by rough road from the nearest train deep in Russia’s Far East, most fly to the city of 200,000 as I did. Here you see Lenin statues — he named himself for the Lena River flowing northward here — beside Soviet-era housing and colorful buildings designed to look like nearby rock formations. Unlike much of the region, it’s booming — largely to the diamonds and gold found in the enormous ‘Sakha Republic.’ There’s mammoth bones to see, cossack-style forts to mingle with sled dogs, Christmas ornaments made of real reindeer, and a permafrost institute that regulary gets phone calls from global warming journalists.

I came in June, as I did in 2005, to the see the amazing all-night Ysyakh festival, a stunning display of traditional costumes and dance. Last time, the Yakut Communist Party ushered me into their teepee-like structure to eat horse meat and ‘admire’ their embroidered Stalin pillow. Earlier I watched a re-creation of a WWII battle with children being saved by men in traditional costumes on horseback. A local told me, ‘Those guys in black are Germans.’ After the battle I joined hands in a coiled dance of the couple thousand and tried to follow along with the dancing and chanting. I’ve not seen its equal anywhere.

I recorded the footage above last year, including the soundtrack of a Jews harp concert replicating a horse. 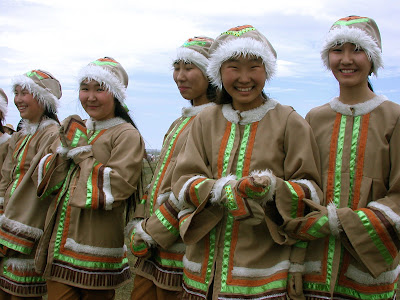 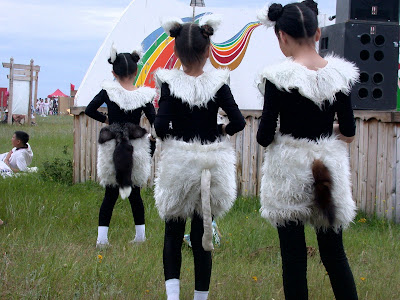