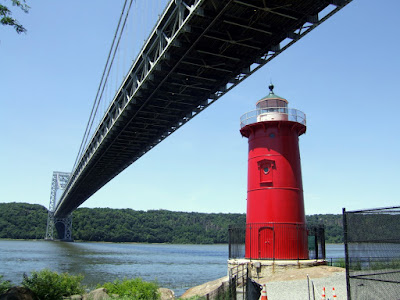 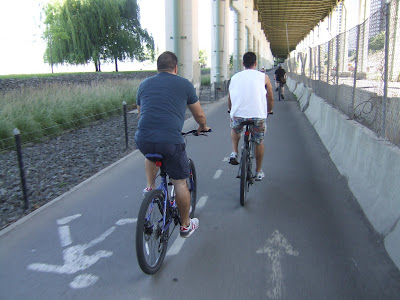 SEEING AN UNSEEN NEW YORK
Bikes and me haven’t been the same since my 15-1/2th birthday, when I got a learner’s permit to drive a car. I’ve had a few over the years — most seem to get stolen — and enjoyed a day or two on a rickety $1 rental in places like Vietnam. But mostly I go by all other means: foot, bus, subway, tram, ox cart, car. 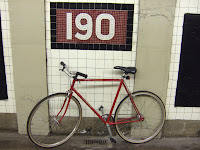 But I feel a U-turn coming. Last week, on an impulse, I bought a 25-year-old red Schwinn frame refurbished with everything else all-new. And yesterday morning I had my first bike-bonding moment. I coasted towards a red light at a busy intersection of 4th Ave in Brooklyn and found myself waiting in the company of nine other bikers. All types. A pudgy gray-haired guy with a backpack, young guy with silk shirt and flip flops, a kid on a BMX, a woman with unshaved legs. I had noticed bikers, but not like this — and I was part of it. It felt exciting.

I was on my way to more moments. I joined up my friends — writers Mike Barish (@mikebarish) and David Farley (@davidfarley) — for an attempt to ride around Manhattan. None of us are pro bikers. Farley — no one calls him David — just got his bike too, and Mike — no one calls him Barish — pleaded incompetence. 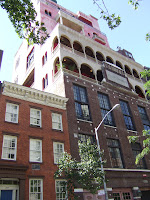 Most New York City bike shops carry the free NYC Cycling Map 2009 detailing the 650 or so miles of bike lanes and paths (also available online), but we didn’t refer to it often. Our plan was to go the easy way, more or less, the bike path running up Manhattan’s west side — use it as a starting point, pedal leisurely, and detour often. At Murray St in Lower Manhattan, we joined the smooth, flat, paved bike path, which eventually ends around 200th St. After a few blocks, Farley, who spent recent years chasing Jesus’ foreskin in Italy for his new book An Irreverent Curiosity, led us off the path to W 11th St to see director Julian Schnabel’s pink, Italian-style Palazzo Chupi on 11th St. Across the street, a hefty door man, with a smile (and scar) on his face, told us that Richard Gere bought an apartment — most go for $20 or so million — hoping to flip it, but ‘no one’s buying.’ He added, ‘Our building doesn’t have as much character. Maybe we should put up a Tahitian hut on top.’ 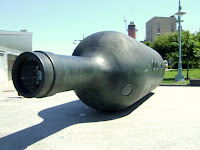 We drove north a few blocks to W 16th St for a quick look at the High Line — the new, elevated city park made from an abandoned freight train line — then, back to the bike path, where we stopped at the four-year-old Clinton Cove Park, with kayaking and Malcolm Cochran’s wine-bottle sculpture called Private Passage with stainless steel interiors replicating the Queen Mary’s. Shortly after Mike — who runs theWrightstache.com to campaign for New York Met David Wright to grow a hairy lip ornament — cheerfully summed up how biking New York ‘reminds you that Manhattan is actually surrounded by water,’ a bicyclist called us all a collective ‘dude’ by objecting to our stopping place, behind a barrier next to the path. 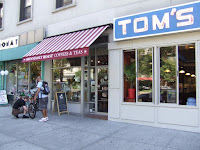 Heading north, we somehow lost the path entirely and had a string of interesting diversions. We rode a couple blocks into Morningside Heights via 107th St and stopped at the first cafe with an ‘Entourage’ poster in the window: Oren’s Daily Roast — next to the Tom’s Restaurant the Seinfeld guys always met up at. I asked the bearded coffee attendant about the poster. ‘I don’t know why it’s there. I think we once kept some of their stuff.’ Hear that Kev Dillon? Your missing Nell DVD is at 112th & Broadway. 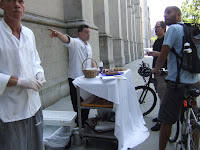 Heading back towards the river to re-locate the path, two guys waved us over by the Riverside Church for free food samples (carrot cake, chicken-and-waffle bites — Mike has a great shot of it here) for their new cafe inside the church. Across the street at the surprisingly stunning Grant’s Tomb (the country’s biggest mausoleum), a ‘park ranger’ told us that the old saying ‘who’s buried in Grant’s Tomb’ is just ‘an old Groucho Marx joke. It’s like saying, what color was Washington’s white horse.’ But actually, he said, the correct answer is either ‘no one’ or ‘Grant and his wife Julia,’ who’s also in there. ‘They’re not buried there. They’re emtombed.’ Farley’s bike pedal was acting up and he turned back (it’d fall off 20 blocks south), and Mike and I continued north, returned the path on the other side of the West Side Hwy via the elevator at Riverside State Park (a rare park built atop a waste refinery), and pedaled past fishers at the riverbank edge and Little Leaguers playing ball in tucked-away fudge-green parks.

Under the George Washington Bridge we found something else you can’t see by car: the Little Red Lighthouse. Moved here from Sandy Hook, New Jersey, in 1921, it nearly was demolished after the ‘great gray bridge’ above was built, but the fame from a popular children’s book of the two unlikely buddies saved it. 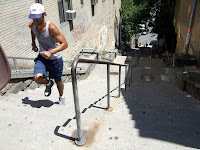 We walked the bikes up a steep bit of the path just beyond, and into a real-live batch of woods, before exiting around 200th St and getting lost trying to find the Cloisters . (It’s best to exit the path at 181st St to cross the Henry Hudson Parkway.) We backtracked, thanks to maps pulled up on Mike’s , along Broadway to 187th St, then carried our bikes up a tall set of stairs to Fort Washington Ave as two work-out buddies zoomed past us, over and over, in sweat-soaked shirts. 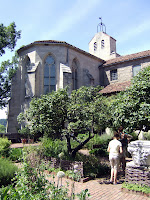 The Cloisters is one of New York’s great museums, built from disassembled 500-year-old European monasteries and housing some of the Met’s finest medieval art works. We were there for lunch. After a mostly turkey-less turkey wrap, and a short conversation with a moustached Floridan in overalls in the garden, we peeked at the exhibits. Walking by a proud photographer noting how one shot would ‘be good for Facebook,’ Mike and I zeroed in on the museum’s best room: of 15th-century tapestries detailing the life and death of a unicorn. One showed a deviant with ’70s rock hair and candy-cane pants thrusting a spear into the unicorn’s chest. 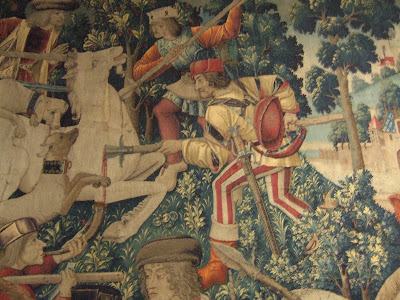 We were only half way around the island, but it was 4pm, and my day on a bike was over. I hopped onto an A train to Brooklyn and — energized by a day seeing a new slice of New York — did the unthinkable: started a conversation with my subway neighbor, Darren. We spoke for nearly 40 minutes. He’s a construction worker that we had passed earlier the day on the path. ‘Biking,’ he said. ‘That’s about the best thing you can do.’

Learning a new way how to see your home as a destination is another.

IF YOU BIKE IN NYC
New York City has 650 or so miles of bike paths and lanes (painted lines on busy streets where you ride between passing and parked cars). Central Park and Brooklyn’s Prospect Park have nice rides — particularly when cars are prohibited on weekends. Also the city’s just released a ‘Queens Around the World’ bike map, which is available free at the City Planning Bookstore.

Some bike shops rent bikes. A staff member at Gotham (see link) told me, ‘More and more visitors are renting bikes. We’re usually out of rentals by 11am.’

Next time, I’ll take in the Harlem River Drive (which hugs the East River from roughly 200th St to 155th St). I hear it’s the city’s best.

5 Responses to NYC By Bike