The NYC Bridge Centennial Commission planned the 100th birthday celebrations two months early, for ‘convenience’ per a recent New York Times article (which may have been based on this press release).

The commission’s celebration timing upset us then, and it still upset us enough on its actual birthday — December 31 — that we braved the morning snowstorm to hold a small party for a bridge generally overlooked by its more famous neighbor, the Brooklyn Bridge.

In addition to cake, we crafted commemorative booklets that deemed recipients as a ‘travel hero’ for celebrating on the actual birthday. (Overstock copies will be sold for $150 each next December 31.*) The party also marked the debut of the first, as we know it, song dedicated — with lyrics — to Manhattan Bridge. We asked local musician Beau Scott Jennings to write one — suggesting something in the vein of Woody Guthrie’s “Grand Coulee Dam” — and he came up with “Manhattan Bridge.” (An abridged version, recorded by the bridge, appears in the video).

Thanks to all the party-goers and to Beau for the great song. 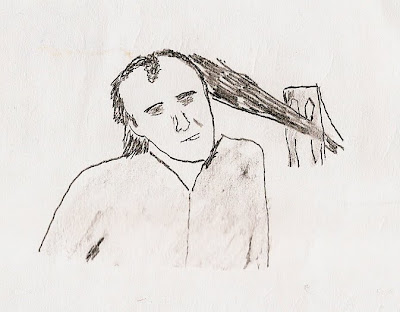 Phil Collins nearly tributed the Manhattan; he used the

nearby Brooklyn Bridge as a backdrop over his
leather jacket in the 1985 video “Take Me Home.”
* not really