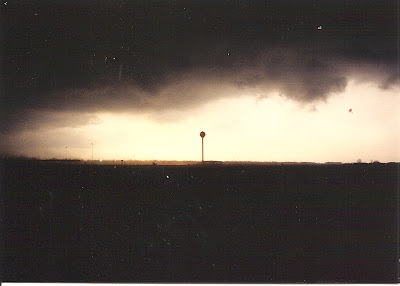 For many people, Nebraska is one of those states in the way. Between cities and mountains, here and there. But when I first drove into Nebraska, it meant something. Growing up in Oklahoma, Nebraska was a fierce yet respected football rival. So crossing the Kansas-Nebraska line for the first time, I leaned forward in my car set — itching to note, survey, savor all the differences that come from something as artificial as a random state boundary not based on geography.

Attention soon turned to something else: the massive midnight cloud moving in from the west.

I grew up in tornado alley, but the only time I’ve been scared was that drive into Nebraska. As hail started to fall sideways across the deserted highway, I kept moving forward. Should I stop out here? A radio DJ was yelling, ‘This is not a test. We under a severe tornado warning. Get someplace safe.’ I finally reached a small town, and pulled behind a small dental office and waited for the storm to pass wondering if Okies were really welcome or not.

2 Responses to Random Photo of the Week: Enter Nebraska