Five-year-old travel expert Ruby Reid, who happens to be my daughter, has taken over the 76-Second Travel Show, by offering five reasons to fill your “bucket list” with a region few consider: Eastern Oregon. (Or, more accurately, in/around the John Day River Basin of Central-Eastern Oregon.)

In a three-day trip, you could easily make a loop of these sites. You’ll never be more than four hours from Portland, and with a few days, you can hit fossil-rich mountains, Martian landscapes and a working ranch.

The Wilson Ranches Retreat, in Fossil, offers a fun peek into ranch life. You’re welcome to join a morning or evening’s round-up of cattle, and pass plates of

German pancakes around the family-style table in the morning. Either way, the family will be out doing it. It’s real. And that makes it something beyond the typical trail ride. In her horse-riding debut, Ruby got a quick lesson and rode off on Tecumseh for a 2.5-hour ride at sunset. (On a downhill turn, she nearly fell off — a cowboy she’d soon have a crush on — saved the day.)

The next morning, I asked if she wanted to see Tecumseh again. “No! I want to ride Tecumseh.” The whole thing was a powerful thing to witness. And she now says it’s her favorite trip from a list that includes Caribbean beaches, a Gettysburg reenactment and Oklahoma swimming pools. 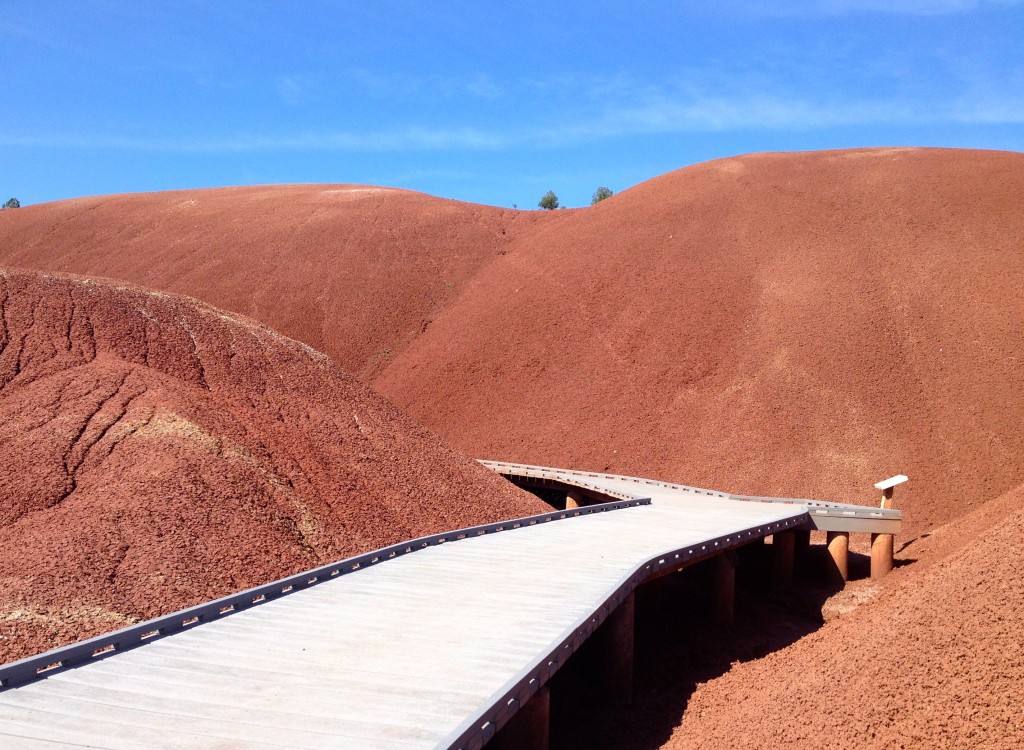 John Day Fossil Beds National Monument offers close-up looks at millions of years of overlapping lava layers, and heaps of fossils. Spring is a great time, when wildflowers bloom and temperatures don’t get too high. John Day’s made of three units — connected on fun two-lane highways. It’s worth seeing them all. The video above is shot at the Painted Hills unit — one of Oregon’s so-called “Seven Wonders” — but the other two were as memorable, and Sheep Rock (near Blue Basin) has a visitor center and a junior ranger program for kids. 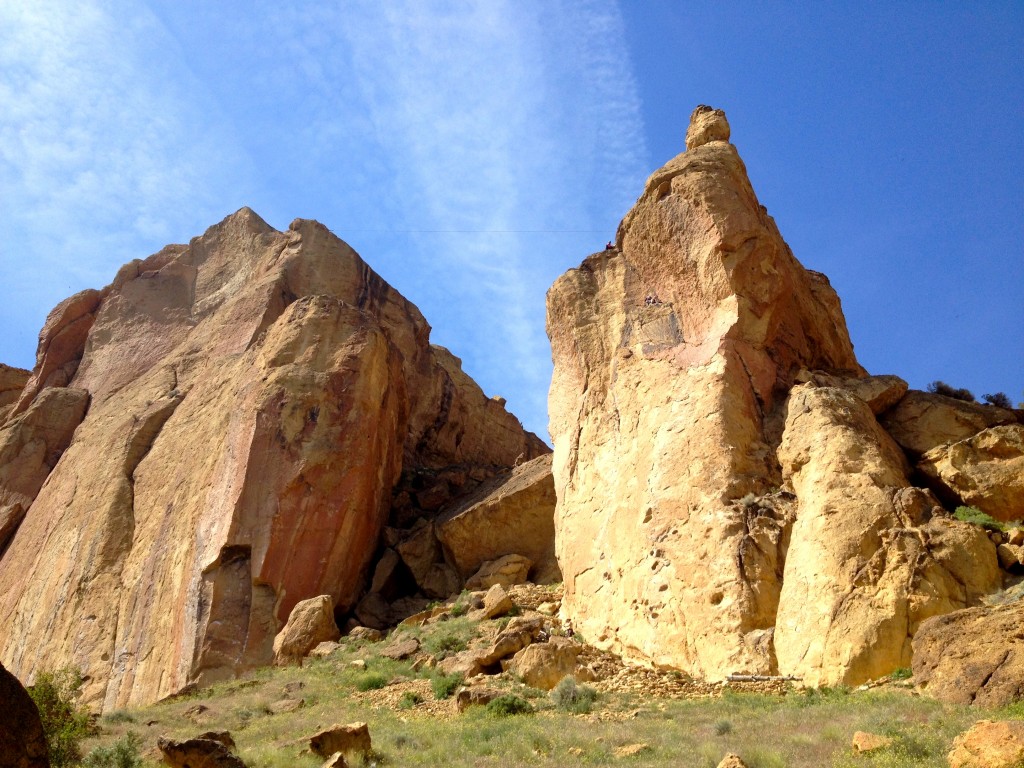 Smith Rock State Park, itself another of Oregon’s “wonders,” is rock-climbing central, and you’ll either be charmed or put off by all the climbers hanging off the steep rock walls. The full three plus–mile loop over Misery Ridge, and back along the winding river banks, was more than Ruby — perhaps all of us — were up for, but getting down to the river trails and looking up at the jagged caldera was remarkable.

By the way, aren’t these Oregon patches cute? 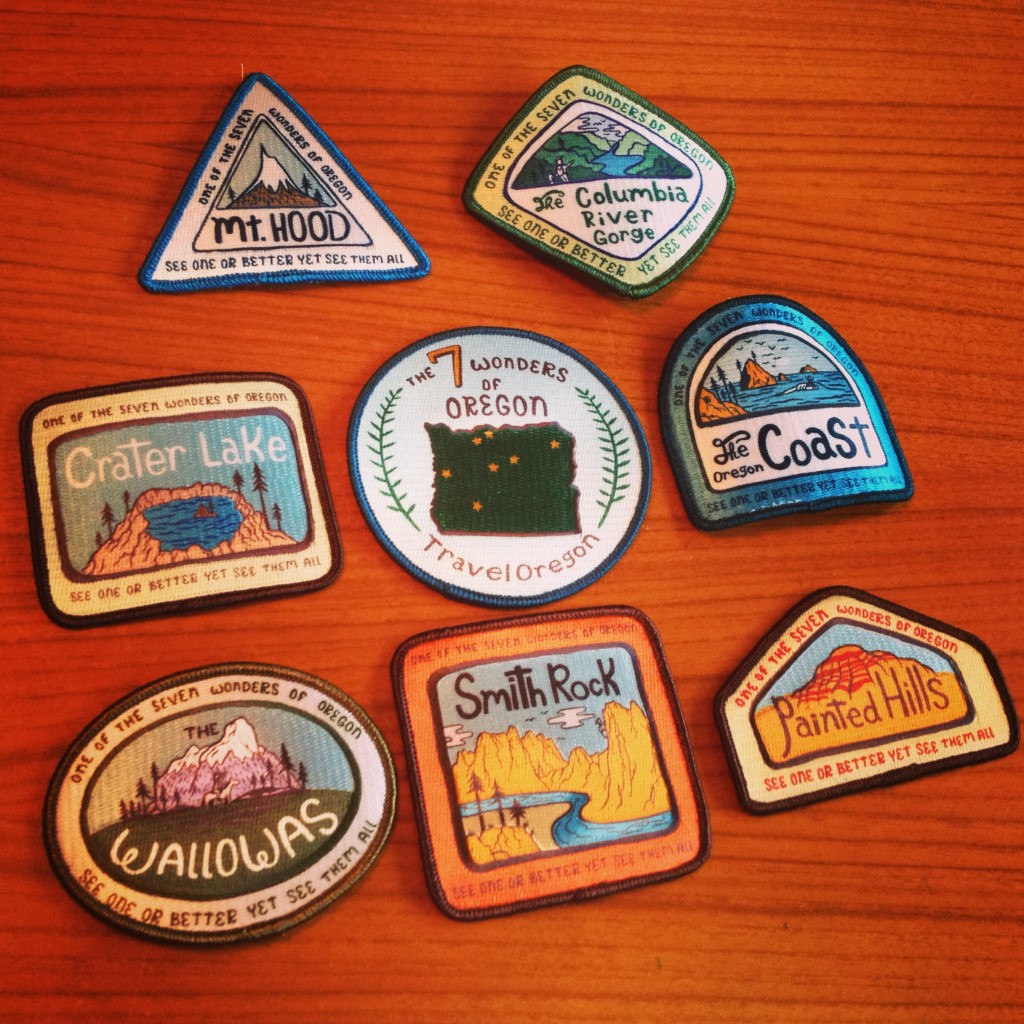