SSTS BANS SEQUELS, REMAKES & BIO PICS
Movies — they’re out of hand. The numbers of sequels, remakes and bio pics would suggest that the Hollywoods of the world believe we, the ticket-buying public, just can’t deal with anything unfamiliar. (Evident in top films this year: Transformers 2, Night at the Museum 2, Wolverine, Ice Age 3, GI Joe etc.)

Cookie-cutter scripts have always polluted Hollywood (just rewatch Elvis’ movies), but now the cookies are getting smaller. In the decade before 2001, generally only one to three of the top-ten grossing movies were sequels or remakes. After 2001, that number fattened to seven or eight, peaking in 2002 and 2003, when all of the top-ten were rehashed films.

–> This is a threat and a concern for those of who kinda like travel, and believe there’s a real benefit to learning new things and meeting new people. Contrary to the notion, as psychologists put it, of ‘familiarity heuristic’ — that only what’s most familiar is what’s most important. 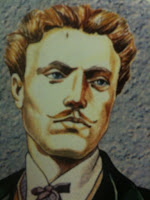 So, SSTS suggests a ban of non-creative movie making (ie remakes, sequels and bio pics) until an apology is made or at least the percentage goes down.

In exchange, the SSTS offers a free, sure-fire movie idea: Vikings vs Pirates.

–> Thanks to the experts for taking the time to help decipher this riddle, and contribute to the SSTS movie idea.