‘War of 1812’ would make a great name for a bulldog. They’re irrational creatures – with misshapen jaws and butts that make them look mean, and squashed tails that easily get infected by passing fecal matter. But down deep they’re really softies with an unfortunate tendency for leg-humping, slobber and youthful deaths.

The real War of 1812, incidentally, turns 200 today. And I’ve been thinking about it lately. Particularly because I knew nothing about it. So I started reading about it.

And came up with these 58 things I want you to know about it.

1. Every US sports game – from Duluth to Lubbock, Eugene to Macon — begins with a song tributing the War of 1812. It’s called the ‘Star-Spangled Banner.’

4. No one agrees why it started.

5. Most of Canada thinks it won the war (because the US so spectacularly failed to seize Upper and Lower Canada).

6. Most of the USA thinks it won the war (because it won the last battle, with help from bearded pirates, at New Orleans).

7.     Most of Britain doesn’t really care (though they are pretty jazzed about burning down the White House in 1814).

9.     Everyone agrees the real losers in the war were the Indians (consistent with most modern accounts, I’m going ‘Indians’ rather than Native Americans/First Nations). Indians aligned with the Brits and began the war with Tecumseh’s brilliant plans for a confederated union of tribes.

11.But really, why? The British navy seized American ships to take ‘deserted’ sailors for their dwindling navy (and supposedly 6700 Americans). Indian attacks in the Ohio River Valley were apparently done with British-supplied arms. The Americans really wanted Canada.

12.Plus the Brits were busy with Napoleon.

13.At first, the US thought it would be a breeze to do – by land. Watching from Monticello, Thomas Jefferson boasted it’d only take ‘a mere matter of marching.’

14.But New Yorker John Jacob Astor ruined a chance to catch Canada off guard early by tipping off British General Isaac Brock, by accident, in an effort to save his furs stored north of the border.

15.Meanwhile, the USA forgot to tell the commander of Fort Mackinac in Michigan, Porter Fricking Hanks, that the war had even started. It fell without a bullet fired.

16.Porter Hanks is a funny name.

17.But he had a particularly bad month. A couple weeks later, Porter’s head was ungently removed from his body by a stray cannonball at Fort Detroit.

18.Typical of American commanders was General William Hull, known to be a pompous, slurring drunk, who slobbered and wore puffy white shirts.

19.Hull made the war’s first attack by ‘taking Sandwich,’ a French-Canadian community near Detroit. One soldier later wrote that locals had been taught the American invaders ‘would eat them.’

20.But soon Hull would panic, go to the fortified Detroit, cower in a bunker, spill tobacco juice from his ‘quivering’ lips to the ‘frills of his shirt,’ then surrender his 2500 soldiers to 1300 British invaders.

21. Panic played a big part of American strategy in Canada.

22. About one in five Canadians link the War of 1812 with the birth of their national identity, per this Yahoo story. (Compared to about zero in the US.)

25.Scalping played a big role. Or fear of being scalped.

26.I lost count of the times of American invaders with bigger forces threw down their weapons and gave up when they heard ‘war cries,’ and worried about being scalped.

27.American Lieutenant Colonel Charles Boerstler, reportedly crying in surrender, pleaded to the Brits, ‘For God’s sake, keep the Indians from us!’

28.Incidentally, the war’s first scalp – taken from a Menominee warrior on July 25, 1812 – was done by a Kentucky soldier.

29.Being assigned to the British warship Nancy must have been like being giving the ‘Mr Pink’ code name in Reservoir Dogs. 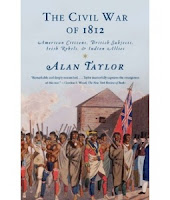 31. Did you realize Canada has a ‘Paul Revere’ too? Her name is Laura Secord – and now she makes ice creams and choco bars.

32. I always wanted to make a movie about Caesar Rodney, the horseback guy on the Delaware quarter who rode to Philly to say ‘yes, we’ll be the first state.’ And how mad he is that Paul Revere gets all the frantic horseback-riding fame. Will Arnett would be Revere, Will Ferrell would be Rodney. Maybe Laura Secord, who did it on foot, could trump them both.

34. PBS’documentary is a little hokey, but fun enough.

35. Turned out, Americans were better at fighting Americans. As one observer of the testy, folly-filled Niagara front said, ‘They will have fighting enough amongst themselves without crossing into Canada.’

36. For example, the Americans’ greatest hits of the war’s first year included suppressing a hotel riot in Buffalo, and a shiny-pistol duel between two rival American officers over in Ontario.

37. Typically, they missed each other, then shook hands.

39.Republican/Federalist relations of 1812 make the US 2012 elections look like a bunny picnic.

40.Even Thomas ‘All Men Are Created Equal/Let Love Rule’ Jefferson suggested (in a letter to James Madison) that rival Federalist leaders in New England should be hanged.

41. And Robert E Lee’s pop, Revolutionary War hero Lighthorse Harry Lee, was beaten so badly trying to defend a newspaper in a Baltimore riot that he’d later DIE from his internal injuries.

42.The Americans did funny things like put Stephen Van Rensselaer in command – an openly anti-war general/politician who’d later lament he couldn’t move to Canada to live!

43.This war sure had a lot to do with Canada!

44.They even wrote a song called ‘Come All You Bold Canadians.’

45. By the way, the USA’s navy – which started the war with five warships to the Brits’ 1000 – were kicking ass left and right. Two centuries on, no one can really explain this.

46.The most famous ship, the USS Constitutionis still commissioned by the US Navy and nicknamed ‘Old Ironsides.’ It sunk many British ships, including one off Brazil.

48.Then the British defeated Napoleon and sent a hell of a lot more British military to North America.

50. Around that time, the US was busy listening to Joshua Barney, who sold the shoestring-budget idea of making a fleet of ‘armed barges’ to pester British warships like hornets. DC was delighted! But no one tested them. And Barney soon found, once facing enemy fire in Chesapeake Bay, they turned like ‘miserable tools.’

51.His retreat showed up the Patuxent revealed how ill-defended the route to the capital was.

52.A few months later the White House and US Capitol were in flames.

54.One Federalist officer, mad at a possible militia mutiny, called them a ‘motley crew of… ragamuffins, rap scallions, slubberdegullians.’

55.In all fairness, the US did have three key and surprising victories: Plattsburg, New York – which stifled the British invasion from the north; Baltimore – which saved a bigger prize than DC and prompted a lawyer to go into poetry; and New Orleans – which happened two weeks after the war ended.

56.But the war ended with pretty much no change.

57.Except the US had a Star-Spangled Banner. And an Andrew Jackson hero to deal with.

58.Is 200 years too soon to laugh at a war? Or does it make you a slubberdegullian?