John Steinbeck visited Niagara Falls in 1960, while on his Travels with Charley roadtrip, and summed it up simply with ‘Niagara Falls is very nice.’ And it is. But when you go, as 12 million do each year, and see the cynical embrace of 1980s-era commercialism and $15 Imax screenings of the falls a stone’s throw from the real thing, it’s hard not to think you’ve been punked after the first glorious view. But it is worth going? Yes, as long as you spend most of your time a half hour away from the famed 170-foot drop in the Niagara River. 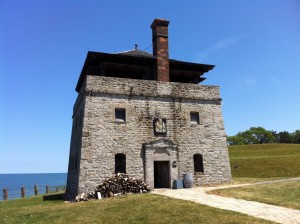 This 76-Second Travel Show visited recently and discovered the secret: Stay in the historic town to the north Niagara-on-the-Lake, eat and drink at Angel Inn, rent a bike to ride along the river, catch a play at the Shaw Festival, and fill a couple days looking at some seriously good War of 1812–era forts on both sides of the border: Fort Erie and Fort George in Ontario, and the French-built stunner Fort Niagara in New York (partially shown, above) — each distinctive from each other and as well-run and impressive as any fort I’ve seen.

One Response to 76: Niagara Falls! Saved by… Forts!!